Euler-Bernoulli beams (B23, B23H, B33, and B33H) are available only in Abaqus/Standard. These elements do not allow for transverse shear deformation; plane sections initially normal to the beam’s axis remain plane (if there is no warping) and normal to the beam axis. They should be used only to model slender beams: the beam’s cross-sectional dimensions should be small compared to typical distances along its axis (such as the distance between support points or the wavelength of the highest mode that participates in a dynamic response). For beams made of uniform material, typical dimensions in the cross-section should be less than about 1/15 of typical axial distances for transverse shear flexibility to be negligible.

Timoshenko beams (B21, B22, B31, B31OS, B32, B32OS, PIPE21, PIPE22, PIPE31, PIPE32, and their “hybrid” equivalents) allow for transverse shear deformation. They can be used for thick (“stout”) as well as slender beams. For beams made from uniform material, shear flexible beam theory can provide useful results for cross-sectional dimensions up to 1/8 of typical axial distances or the wavelength of the highest natural mode that contributes significantly to the response. Beyond this ratio the approximations that allow the member’s behavior to be described solely as a function of axial position no longer provide adequate accuracy.

Abaqus assumes that the transverse shear behavior of Timoshenko beams is linear elastic with a fixed modulus and, thus, independent of the response of the beam section to axial stretch and bending.

The Timoshenko beams can be subjected to large axial strains. The axial strains due to torsion are assumed to be small. In combined axial-torsion loading, torsional shear strains are calculated accurately only when the axial strain is not large.

Numbering of integration points for output

Stress and other tensors (including strain tensors) are available for elements with displacement degrees of freedom. All tensors, except for meshed sections, have the same components. For example, the stress components are as follows:

Stress and strain for section points for meshed sections

Trapezoidal, I, and arbitrary library sections allow you to define the location of the origin of the local coordinate system. Other section types—such as rectangular, circular, L, or pipe—have preset origins.

You can specify “generalized” cross-sections by specifying the geometric quantities necessary to define the section. Such generalized sections can be used only with linear material behavior although the section response can be linear or nonlinear. Nonlinear generalized cross-sections are not supported in ABAQUS/CAE.

In ABAQUS/CAE, you can define a beam section with generalized shape shown as below. The section geometry properties can be defined in this dialog window. The location of the centroid and shear center, the output points as well as the transverse shear stiffness are allowed to define directly as figured below. The keywords generated in input file are listed below. 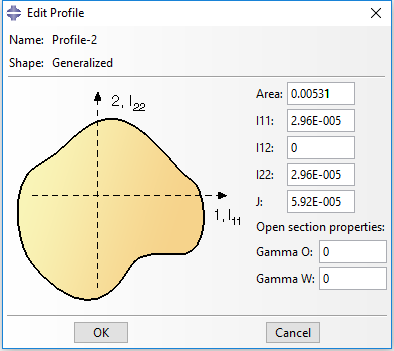 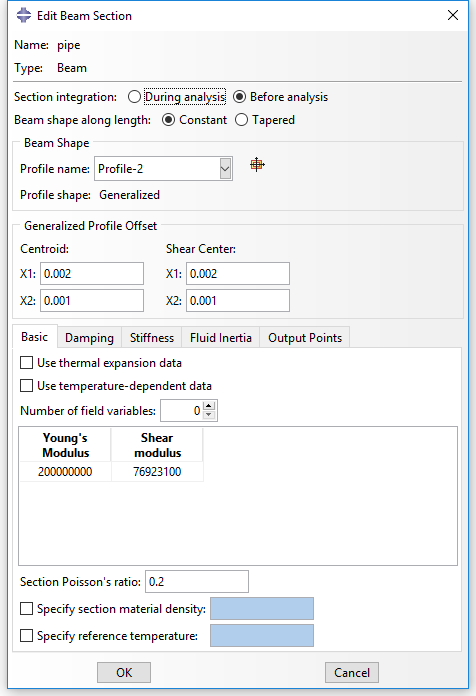 The Section Poisson value must be between -1.0 and 0.5 with a default value set to 0.0 so that this effect is ignored. This value is only valid for the shear flexible elements providing for a possible uniform cross-sectional area change. This effect is considered only in geometrically nonlinear analysis (see “Defining an analysis,” Section 6.1.2) and is provided to model the reduction or increase in the cross-sectional area for a beam subjected to large axial stretch. Setting the effective Poisson’s ratio to 0.5 implies that the overall response of the section is incompressible. This behavior is appropriate if the beam is made of rubber or if it is made of a typical metal whose overall response at large deformation is essentially incompressible (because it is dominated by plasticity). Values between 0.0 and 0.5 mean that the cross-sectional area changes proportionally between no change and incompressibility, respectively. A negative value of the effective Poisson’s ratio will result in an increase in the cross-sectional area in response to tensile axial strains. Why the cross section area increases under tensile axial strain?

If you want to get the stress and strain on integration points, you have to define the output points in “Edit Beam Section”. To locate points in the section at which output of axial strain (and, for linear section behavior, axial stress) is required, specify the local \(\left( {{x_1},{x_2}} \right)\) coordinates of the point in the cross-section: Abaqus numbers the points 1, 2, … in the order that they are given.

The variation of \(\varepsilon \) over the section is given by

The procedure for analyzing and postprocessing a beam analysis using a meshed cross-section is as follows:

The cross-section is meshed using special-purpose two-dimensional elements: WARP2D3 (3-node triangular) and WARP2D4 (4-node quadrilateral). These elements have one degree of freedom per node representing the value of the out-of-plane warping function and use a solid section definition. The way to generate and use the generated cross section properties is detailed in Abaqus Analysis User’s Guide.

The keywords in input files for general section and meshed cross section can be referred to Abaqus Keywords Reference Guide and summarized here.

Notes: (1) Sectorial moment \({\Gamma _0}\) and warping constant \({\Gamma _W}\) are only needed in ABAQUS/Standard when the section is associated with open=section beam elements. (2) (0, 0, -1) are the default values for beam orientation if the first beam section axis is not defined by an additional node in the element’s connectivity. (3) If the TAPER parameter is included, two lines of properties of node A and node B are required. (4) \({x_{1cm}}\) and \({x_{2cm}}\) are the local 1-coordinate and 2-coordinate of the center of mass.

A steel frame with pipe section is analyzed with different section settings with beam element B31. Displacement control method with a maximum vertical displacement 1m at the vertex of the frame is adopted. The pipe section has a diameter of 219.1mm and thickness of 8mm. The material possesses density of 77 and elastic module of 200GPa and the poison ratio of 0.3.

The transverse shear stiffness are specified. The keywords in input file are listed below.

The force-displacement curves of the vertex are illustrated in the following figure and accord well with each other.

5 comments On Beam elements in ABAQUS